Free Press Unlimited believes gender equality in and through the media is essential in achieving our long-term goal: for journalists to function as change agents and to contribute to a diverse and professional media landscape.

Despite some progress in gender equality over the recent decades, all over the world the participation of women in the media lacks behind alarmingly. The media sector needs to show genuine efforts to promote gender equality and the empowerment of women.

At Free Press Unlimited, gender equality isn't just another box that needs to be ticked. Our aim is that media actively advocate for gender equality and work towards increased participation and decision-making of women in and through the media. Media are powerful actors in shaping, producing and changing societal norms and beliefs. Media show the realities of the society, but at the same time construct this reality by continuously enforcing the existing differences between women and men.

Gender inequality in the media refers both to the content that media produce as well as the operations in the media sector itself. That’s why in our gender programme, we focus on the following areas:

Female journalists face harassment and discrimination while doing their job. Physical, sexual and online abuse is a daily reality for many female media professionals. Nearly two-thirds of female journalists have been threatened or harassed online and more than half have even been threatened in person. Furthermore, women rarely occupy decision-making positions in newsrooms: close to three-quarters of the managerial positions in the sector are occupied by men.

Together with her partners, Free Press Unlimited works on empowering female journalists by improving working conditions in newsrooms and investing in the skills and opportunities of female journalists. We do that for example by:

Gender representation in the media

In many countries, both men and women are subjected to stereotyping. Women are portrayed as housewives, victims or models. Men are typically characterised as powerful and dominant with little room for alternative ideas of masculinity. Furthermore, women are often less visible in the news and their stories remain untold, only one in five experts interviewed in news media are women. As soon as journalists are looking for an expert opinion, women literally drop out of the picture.

Together with our partners, Free Press Unlimited works on a fair gender portrayal in and through the media. For example by: 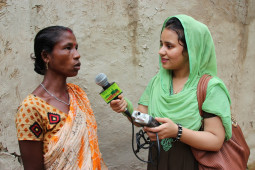